In work, as in life, it’s always nice to have someone in your corner. For many professionals, that person is their mentor. Read on to learn about who some of our edtech leadership team count among their most influential mentors and what advice they’ve received that still resonates with them. And if you’re looking for a mentor, find out how they suggest you find one.

What is a Mentor?

How is a mentor different than a confidant or friend at work? A mentor is someone who:

The Benefits of a Mentoring Relationship

There are many benefits of having a mentor or being a mentor, including these:

If you’ve benefited from a mentor, consider paying it forward. Almost 90% of mentees say they would also like to become mentors.

We spoke with seven members of our leadership team about mentors who have made a difference in their professional lives and what advice they’d pass along to others. Learn more about their insights in the Q&A below.

Tell us about one of your most influential mentors. How did you connect with them? 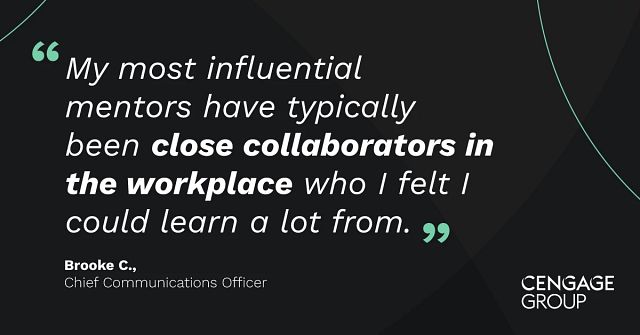 Usually, my mentors have been my managers or the managers of my managers. My first manager at Cengage was one of those influential mentors. The reason the manager relationship also had a mentorship dimension is because, after 9-12 months of getting to know each other, both of us stated that willingness to have a more meaningful relationship.

I've benefitted from a range of mentors during my life - all have been influential in various ways. Some mentors have helped me shape my approach to how I work - my functional expertise. Others have helped me shape how I partner, collaborate and influence. My most influential mentors have typically been close collaborators in the workplace who I felt I could learn a lot from.

I have been fortunate to have great mentors throughout my career, all of whom I met through work or work connections. They’ve helped me navigate big career decisions, including changing jobs, and have advised me in my various roles about leadership, team dynamics and more.

I’m thankful to have Rainer Gawlick as a mentor. We have stayed connected for the better part of 20 years and he is the person that encouraged me to get involved with apprenticeships.

Another would be Jeff Ray. Every time I have considered a change in role either inside a company or moving to a new company, Jeff has been the guiding light to really challenge me about what I was hoping to gain out of the role, what was I excited about and why was it important to me. If I didn't answer these questions to his satisfaction, he would lean back and smirk knowing that I had overlooked something.

The final person to thank is Elliot Katzman, who I've known for more than 20 years and over multiple companies. He's been a guiding light in the technology industry and helpful in bringing me into opportunities to help startup companies with their technology strategies.

Rather than one mentor, I have built up a team that I think of as my personal Board of Directors. In the beginning, this group was built up informally and then I began to add people more formally in my role at Boston Consulting Group. Membership may change somewhat over time, but the core is always there. This approach has worked well for me, and I suggest it for those I mentor as well.

Chris Hsu was a colleague at KKR and was the team leader for my first project there.  We worked closely over my first two years at KKR, and Chris became a close friend and mentor. We continued to talk regularly, even as our careers headed in different directions and across different geographies.

My dad was one of my most consistently influential mentors.

One of my most influential mentors was a colleague at my first job. She was a few years more senior and took the time to show me the ropes and be an informal mentor. I think that these organic, informal relationships have been so critical to my work experiences and professional growth, and this was the first.

Can you share a piece of advice you’ve gotten from a mentor that you think others could benefit from having as well? 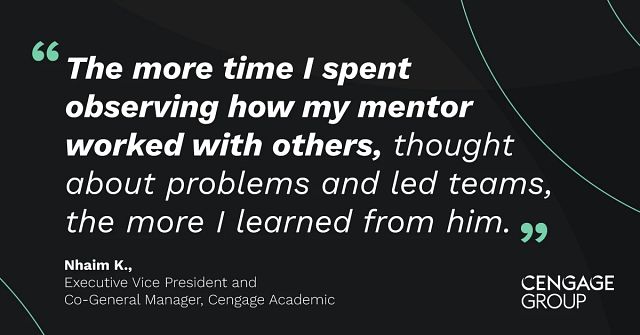 There were many pieces of valuable advice. However, as I reflect of that mentorship relationship, the biggest benefit I got was to observe my mentor in action. The more time I spent observing how he worked with others, thought about problems and led teams, the more I learned from him. And I learned things that I wanted to emulate, but also things that I did not. That is the beauty of our career journeys. They are very personal but having that close access to my mentor’s journey (and finding space to discuss my learnings with him) allowed me to craft my own personal career development.

I've picked up a lot of advice along the way; three pieces of advice have stuck with me and remain meaningful in my day to day are:

When I first joined an executive team, Jeff Ray told me, “Now that you sit at this table, you inherit a new job beyond your own.” He didn't mean it literally, but he suggested that we leave our titles at the door and come together as a leadership team to act in the best interest of the company in its totality, not just the best interest of our individual departments or business units. In this same vein, Michael Hansen gives the advice that you also become a steward of the business both inside and outside the company. I respect both of these leaders and I’m not surprised that they both had similar advice, albeit 20 years apart.

Another piece of advice I've gotten is that when you’re considering a new job opportunity, either internally or externally, ask yourself, “am I running away from something or running to something?” Are you just trying to get away from something that you’re unhappy about or are you moving toward something that you think will be genuinely fulfilling and help you meet your career goals? I also suggest checking out this piece of advice that Mike Troiano shared with me that he received early in his career. Mike’s candor and willingness to share his own experiences and advice have hugely benefited me, and I know will equally benefit others.

I have received a lot of valuable advice over the years. However, the greatest counsel always comes not as a directive of what you should do but is cloaked in a question that gets you thinking about what the best choice for you and your situation would be.

Get feedback on your ideas early and often. I had (and still have) a tendency to try to get my work perfect – I want to make sure that my ideas are good enough before I share with others for feedback. Chris pushed me to invite feedback early and often, and from a broad set of stakeholders – he called it “rapid prototyping.” This helps me to expand my thinking much more quickly and bring perspectives that I would have never had on my own.

Be the person people want on their team. Practice important things before you do them for real. Put your hand up and volunteer even if it means more work.

If possible, spend the time connecting with the people you work with outside of the office – I’ve found it’s the best way to build trust with those you work with. I have to say, this advice has paid off in spades.

If someone’s considering looking for a mentor, where would you recommend they start? 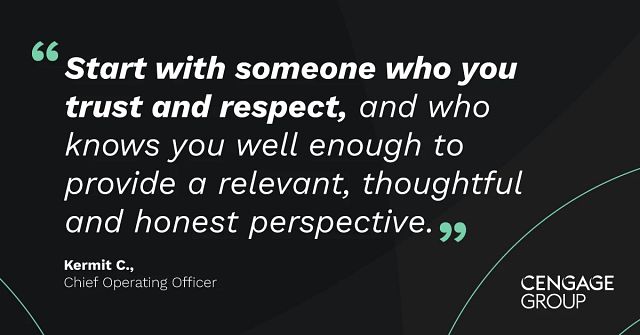 Given my personal experience, I recommend people start with their managers. Talk openly to your manager about being your mentor. Our managers usually know us the best at work and we spend a lot of time with them. Mentorship is a natural extension to that manager-employee relationship. I recognize that sometimes it’s not possible for our managers to be our mentors: they are too busy with other mentees or they are not ready to be mentors. That’s okay, I would still encourage you to ask your manager of who they think could be a good mentor for you.

I would recommend the person start with themselves. A mentor is only as good as the goal or need that the person has defined for themselves. If a person doesn't know what they want to improve or have any specificity to what they want to change, the relationship with the mentor will likely feel untethered. Figure out the area of need for yourself, or with the help of your manager, and then look around you to find people who do that thing well.

I absolutely recommend you look for a mentor and don’t hesitate to reach out to make connections with potential mentors. In my experience, people are usually flattered that someone thinks of them that way and would be thrilled to be able to help someone else navigate their career. Look to those around you that you think can provide sounds advice and guidance. I think regardless of where you are in your career having a mentor or a set of mentors to help you navigate is critical to your success.

Before you reach out to someone, consider your ‘why.’ What are you trying to accomplish and why? This will help lead you to someone who might be able to offer sound advice to help get you there. Also, ask yourself what you might be able to do to help the person mentoring you. Don't underestimate the willingness of people to network with and mentor you. People are generally more willing than you might think.

Start with someone who you trust and respect, and who knows you well enough to provide a relevant, thoughtful and honest perspective. I have been fortunate to work with several mentors over my career, and a common thread is that they have been thoughtful but also willing to challenge me when needed.

I recommend looking for a mentor (or a collection of people) who embodies the core values you have and want to emphasize in your work and life. It's easy to be drawn to what looks like outward success metrics but that have been achieved in ways inconsistent with your core values.

I would look for people who have had experiences like yours at work. Whether it’s someone who once had your job or one like it, or knows your ‘state of play’ well, I think it’s great to have someone who has familiarity with your context and has a broader or more senior perspective.

Connect With Our Edtech Leadership Team

To learn more about our edtech leadership team, follow them on LinkedIn: